PS1 has carried out two main surveys: The 3pi survey covers the 30,000 deg2 (3 steradians) of sky north of Declination -30º in 5 filters (grizy) with approximately 10 exposures per filter to a combined depth of approximately 21-23 mag. The Medium Deep Survey covers 10 fields, each about 7 deg2, with hundreds to thousands of exposures per filter to reach a combined depth of 24–26 mag. In addition, other surveys like the M31 survey, and an ecliptic plane survey, were carried out. In DR1, only data from the 3pi survey is made public. Future data releases will make the rest of the data public.

The PS1 telescope surveyed the sky in several different areas using various observing strategies. The 3pi survey covers the 30,000 deg2 (3 steradians) of sky north of Declination -30º in 5 filters (grizy) with approximately 10 exposures per filter to a combined depth of approximately 21-23 mag. Data were taken over the period  between 2009-06-02 and 2014-03-31. The Medium Deep Survey covers 10 fields, each about 7 deg2, with hundreds to thousands of exposures per filter to reach a combined depth of 24–26 mag. Other secondary surveys (M31 survey, ecliptic plane survey, celestial north pole) also were carried out.  The initial PS1 data release includes only the 3PI survey, but other data will be released as processing is completed.

The 3π survey pattern and scheduling followed two different strategies over the course of the  survey: the initial pattern layed out in the Design Reference Mission (DRM) Chambers & Denneau (2008) followed by the Modified Design Reference Mission (MDRM). We switched to MDRM on 2012-01-14. All exposures in the DRM were taken in pairs, with each exposure separated by a Transient Time Interval or TTI of 12 to 24 minutes, check for the purpose of detecting moving objects within the Solar System. These were referred to as “TTI pairs”.

The original plan was then to take 2 TTI pairs over an observing season with gri taken within the same lunation and separated by days to weeks. The z and y  were to be taken approximately 6 months apart to optimise stellar parallax and proper motion measurements (for low mass stars). Over 3.5 years this would give (allowing for weather interruptions) 12 exposures in each band or 60 in total over all 5 filters. In the MDRM, a series of 4 exposures, “quads”, all separated by approximately 15 minutes (therefore completed within about 1hr), were implemented for about half of the gri exposures with the express purpose of increasing the recovery of Near Earth Objects (NEOs). The relative exposure times in each were also chosen to make an asteroid of mean solar color  to have approximately the same signal-to-noise.

The exposure times for each individual exposure was as follows (e.g. a TTI pair in g is composed of 2 x 43 sec exposures, separated by 12 to 24 mins)

There are typically a dozen pointings at each point of the sky in each filter over the course of the whole 3Pi survey.  The pointing centers are dithered to enable the construction of a seamless image that fills in regions of bad pixels in most parts of the sky.  The table below shows the mean number of pointings and its rms variation over the whole survey as a function of band.

PS1 has a floor to its image quality, arising from the wide field optics, so even the best images do not have a FWHM < 0.6".  The image quality also depends on the filter, with the reddest bands displaying the best. Figure 15 shows the cumulative distribution of the image quality as characterized by a FWHM for each filter for the PS1 Surveys.

The Table of 3Pi survey characteristics is taken from Chambers et al. 2016 and reproduced here for information.

The 10 fields in the Medium Deep Survey are described below.  Each field was observed several times a night during the months of the year when it was observable.  In total there are hundreds to thousands of exposures in each of the 5 filters (grizy), enabling the construction of very deep stacked images. The depth of individual exposures is the same as for the 3PI survey in the table above; the depth of the stacked image sum is shown below. The MDS data will be released at  later date and more information will follow on these data.

Observations of 3-5 MD filelds are taken each night and the lters are cycled through in the pattern:g and r in the same night (dark time), followed by i and z on the subsequent second and third night, respectively. Around full moon only y data are taken. An epoch consists of 8 dithered exposures of 8 times 113 seconds for g and r or 8 times 240 seconds for the other three (i,z, and y), giving nightly stacked images of 904 and 1920 seconds duration. A more detailed description of the observing strategy is given in PS1 Observing strategy.

Include an infobox below the picture. Summarize key facts in the infobox. The infobox helps users quickly assess the content of the article 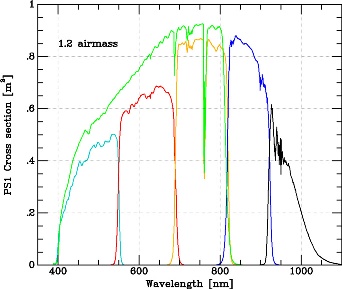