The PS1 object identifiers (objID in the database tables) are computed from the object positions.  We do not recommend trying to extract the positions directly from the objID because subsequent calibrations have significantly improved the positional accuracy of the RA and Dec columns. However, the objID is the primary key in most PS1 tables, and it is useful to know how the objID is related to position.  Partitioning the table by objID approximately divides the table into declination strips.

How the object identifier is computed from RA and Dec

The objID index is derived from right ascension and declination. While it is possible to calculate the RA and Dec from the objID, it is not recommended to do this, because the objID is based on the astrometric solutions from individual exposures and stacks as they are ingested during an early phase of the PS1 data processing. Consequently the positions derived from the objID have not been calibrated against 2MASS or Gaia. It is recommended to use raMean, decMean from ObjectThin. Included below is the C code for the translation between R.A. and Dec., for users interested in the relationship.

The figure below (adapted from a similar figure from Heather Flewelling) shows an example of computing the objID from specific RA and Dec values. 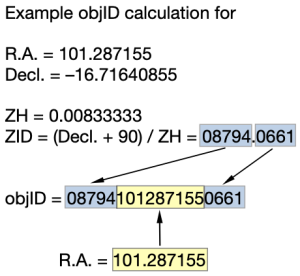